Nope, haven’t forgotten about Dainty Dot. Truly have not. It’s been a bit of a busy month. And I’ve had other things on my mind. Dainty took a backseat for a bit.

A backseat to what, you ask? I’ll review in photos … 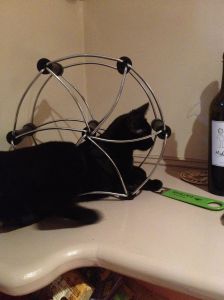 Boo – she’s growing too fast. My iPhone can barely hold all the photos I take of her.

June has so many Instagram opportunities. I can’t keep up. Pretty, huh?

I’ve been perfecting my pizza-making skills. And man, do I have mad skills with the dough.

I’m slightly obsessed with yoga. Just slightly, but in a good way. Maybe I’ll talk to you about it someday. But for now, know that this mat has become a good friend of mine. And it’s fashionably orange.

So, I’m a potato farmer’s daughter. And an avid gardener. And for the first time this spring, it dawned on me: Why not grow some potatoes? And it shall be so. Technically once the flowers bloom, there should be potatoes under the ground. But I want them bigger than peas, so I’ll await awhile. 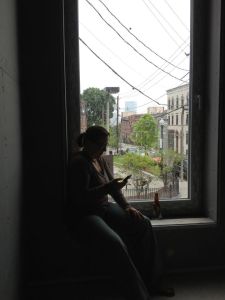 Oh, yeah, and by the way … we’re buying a brand-spankin’-new unit in a brand-spankin’-new building. New as in, this was a vacant lot last July. And it’s highly energy efficient and will have solar panels and is built like a German tank – and that’s with good reason. Obviously, more on this later.

And have I mentioned lately that I love this person? I do, and I’ll do it all again in a split second. (Ain’t she a cutie, too?) 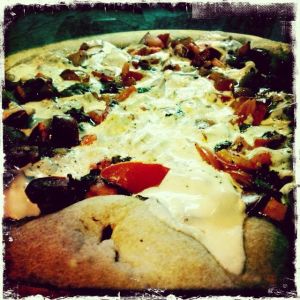 More pizza. I might be slightly obsessed with pizza, too. Always in a good way.

But just because I haven’t been writing here doesn’t mean I haven’t been writing. I’ve been taking a spin at fiction. More of a poetry-short fiction hybrid type of writing. And the cool thing is it’s fiction inspired by photos. The images are all iPhone Instagram pics taken by a friend who has a knack for knowing there’s a story behind a scene. Take this one, for instance. Who left the phone? Why? Who was on the other end? I took a stab at it—and a bunch of other photos, too—and am publishing them at The Skinny Fedora. The one above is “Hope Asked.”

So, give The Skinny Fedora a quick read and let me and the other skinny girl know what you think. Leave comments here or at www.theskinnyfedora.com.

Okay … now for something a little different.

So, professionally, I’m a writer and editor. For a trade magazine. I write about new flowers and tricks about how to sell them to you, the unsuspecting consumer.

Non-fiction, all of it. Except for a few marketing spins I will occasionally put on some side projects, of course. There’s not much leeway in my writing life for creative expression, not much chance for letting words form that which has never existed before, or ever has much chance of existing.

Every once in a while I get an itch to go there.

Apparently I’ve been blind as to the forays into fiction that are open to me around this. For instance, NPR has this Three Minute Fiction contest. Who knew, really? Here’s the deal with it: They give you an opening sentence; you write a piece of fiction built around that first sentence that can be read in about three minutes (roughly 600 words); and may the best person win. Win what? I dunno. But it’s intriguing, isn’t it.

I missed the deadline for Round 8 of course. (Round 8?? Seriously, where have I been???) But I’m eagerly awaiting the sentence for Round 9, as the judges are still pouring through the submissions for the previous round.

Encouraged by a few supportive friends, I decided to exercise my fiction-writing skills. What’s below is my attempt at being creative—no mention of flowers, no marketing spin, no attempts at humor even … it was refreshing, actually.

*Ahem* Just a few notes before you get reading:

Comments? Questions? Leave ’em below. And, thanks.

She Closed the Book

She closed the book, placed it on the table, and finally, decided to walk through the door.

The woman had been reading the slim novel—a smutty 1950s paperback she pulled from the cottage’s shelf—while eating a microwaved burrito over the kitchen sink. The book was a lark, a piece of mindless romance for an absent-minded vacation at the lake. The lake, the cottage, a week of worthless reading—she wanted her most immediate concern to be the turning of the next page.

She had turned the page. Read the words. Then felt the words, felt them as they fell onto her skin, pressed from behind her eyes. As the taste of beef and cheese melded with the memories, she stood there, stomach knotting.

Except the woman had been a girl. The room was strange and filthy, the boy she knew only a little. Her kicks and pushes and spit didn’t meet their target, only provoked it. She recalled the pink and green fleur de lis wallpaper, peeling; the child had calmed, breathed through it, took herself elsewhere.

The woman can still see the brown and black-spotted dog with its ratty collar, fraying leash, she had spotted later from the window. Can still hear its constant barks from its own dose of filth and bruises. She hadn’t known this place and wondered if it had been his. It had barked anger. The child could only simmer and forget.

The door shocked itself open with the woman’s will. Wooden steps ached with her footfalls. The late-afternoon air rushed forward as she made her way across the pine-patched forest floor toward the lake.

After years of not knowing, she remembered.

A boulder, dropped like a tear from a glacier long ago, held her above the lake’s edge. Warmth from the day flowed from it into the woman. She removed herself from herself, as she had done that day, as she had done many times before, not knowing why it had come so easily. Rock, water, sky…this is all she had at this moment, all that would sustain her. Fixed gaze on pines. Breath.

Stars touched her hair, made it sparkle like light on water. It stirred her mind, gone missing for hours. Like life coming to Lazarus, her lungs filled, chest heaved. The woman had come home.

She stepped down from the ancient hold, noticing the cuts on her feet as she walked along the shore, through the woods. The owl, a dream last night, spoke to her now, soothed her soul as she felt her way.

The woman stood. She breathed in and understood. She understood and released herself into the open night air. Finally, she walked through the door, picked up the book, and continued to read.

You are currently browsing the fiction category at The Dainty Dot.