Linguine with Clam Sauce: The Payoff

This is the best part. This is when the clams go from mollusk-stuffed rocks to dinner in no time at all. This is the kind of 30-minute meal I’m talkin’ about, sista. Step aside, Rach. Ellen’s makin’ dinner.

Large pot, filled with water, add handfuls of kosher salt until it “tastes like the sea,” as Giada would say. High heat. When it boils, throw in a pound of linguine – you know the drill. Keep an eye on doneness while you’re prepping the rest. Cook until nearly done, then just turn off the heat and let it coast in. When clams are nearly done, drain the linguine. Reserve 1/2 cup cooking water to add back into the pasta if you wish.

Two or three big fat cloves of garlic, smacked and minced go into a saute pan with EVOO, a tbs or two. Throw in a fresh anchovy fillet (or two for good luck). Medium heat ’til the anchovy melts and it smells like Italian heaven.

Add a half cup-ish dry white wine. Nothing you wouldn’t drink yourself, but I’m not talking a Dog Point sauvignon blanc here. We used a Sevillon/Chardonnay blend that is on the I-wouldn’t-chuck-it-down-the-sink side.

Clam juice – that’s right, we’re adding clam juice to clam sauce. Like adding chicken stock to something. Just a touch of added flavor. Let that come together for a bit. It’ll boil more quickly than you think.

Now’s the time that some will get squeamish. It’s ok, really – the clams are destined for a greater purpose at this point. We had about 30 clams. Only about 10 at a time fit in the pan. Throw ’em in, cover, and wait for the little guys to give it up. It takes between four to six minutes, depending on size. We had some big clams that took quite a bit of time. And, something I never knew – when the clams open, it’s not like it’s a slow-motion death yawn. There’s a definite rumbling in the dying clam’s vicinity, and then a sudden “pop” – the pearly treasure reveals itself. I’m exaggerating with the pearl comparison, of course.

When they open, take them out of the “juice” and pry out the meat. Reserve shells (for fumé). Add next batch to pan, and so on until they’re all cooked and open.

Mince your clams. Add back to the saute pan – which now magically has way more liquid in it from the clams – and let them heat up again. Add in your pasta. Mix until amazing.

Serve up, garnish with fresh chopped flat parsley – never, never the curly stuff. (By the way, we added parsley we harvested from our garden back in November. Man, that stuff keeps when prepared properly. Fresh garden parsley in January, yo.)

Eat. Try not to slop it all over yourself. That may be the hardest part of this whole experience. 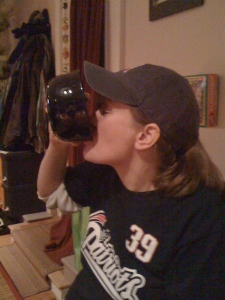 You are currently browsing entries tagged with garlic at The Dainty Dot.