So, what have I been doing, maintenance-wise … Let’s see:

1. Exercise stuff. I had big plans to lose 6 lbs by the end of the month. A continuing bum knee (yes, ma’am, I did finally go to the doctor) kept me from running, but I learned to love the elliptical. But the 6 lbs? No way, but close.

2. I discovered I love yoga. Like, really LOVE it, with all caps. It’s kinda like how I really get excited about a batch of soft and growing bread dough. Or when the row of spinach seeds come up. But instead of bread forming or food growing, it’s me doing something really cool. I like it. I want it. I’m gonna keep doing it.

3. Shhh … Don’t tell my boss … I’ve learned how to streamline my work to get it all done in about … Well, in less time. At least for now – until travel season starts in a matter of a month or so. But, it’s afforded me some time to do #1 and #2.

4. I did go on one biz trip and extended it into a long weekend in Chicago with Jennifer. Here’s my thought on Chicago: It’s s nice town, and too bad it’s in the middle of the country. Because as you may or may not know, I’m a time zone snob. I just can’t do the middle. No offense, Middle America. You’re just not for me.

5. #3 also afforded me time to do some soul searching about what I wanna be when I grow up. And I realized, wait, I’m already all grown up. As Bette Midler says in my most favorite song she sings, “Is that all there is?” The answer? The answer … If I had the answer, man …

6. Speaking of looking for answers, So I picked up a thin book that’s been on my shelf for about a dozen years. It’s called Buddhism Without Beliefs. It’s not religiony in any way – hence the “without beliefs” reference – and it’s been a good way to get my head decluttered. I recommend it.

7. Pie was made. And if there’s anything Dainty does, it’s pies. It was just one pie, but it was a mighty fine pie. Dutch apple. Sorry I didn’t share. I’ll make another. I promise.

8. Dainty has plans in the works for 2012. Big plans. Now with the paying work streamlined into lean-flow efficiency, I have some time to do Dainty the way it deserves. Details to be revealed over the next month or so.

9. So, here’s a question for you: what do YOU want to see Dainty do next year? More travel stuff? More baking? Bread or sweets? Wanna know more about my mad skills in the garden? Oh man, I mean I’ve got mad skills. You want to see something, you let me on know. ‘K?

In fact, this blog was originally going to be called “Ellen Bakes.” Imagine when I heard that Martha is premiering a new show later this month called “Martha Bakes.” Coincidence? She must have bugged my house …

Am I baking today? No. This week? Probably not. Blame it on a preparation for a business trip/presentations coming up in a few days. But don’t you fear – I’ll be baking (said with a slight Arnold Schwarzenegger/Terminator affect).

Year of the Pie?

Coincidentally, I heard a buzz that 2011 will be the year of the pie. Sweet pies, savory pies, hand pies, round, square, pan—you put a crust of any sort on it, in it, around it, call it a pie and it’s a rock star this year. And, not to steal Martha’s catch phrase but … that is a good thing. Because Ellen bakes pies. Always have.

Pie crust is an amazing canvas. And really, I’m fixated on perfecting that canvas. I’ve in no way come even half way to making a top-notch crust, but I love the challenge. Fillings? Yeah, ok – it’s the stuff of the pie. But I always remember the crust.

Best pie crust ever is my mom’s crust from my childhood. The flakiest ever, thanks to lard. Rendered from our own pigs. Didn’t mean to skeeve you out but when you grow up on a farm you can expect that sort of thing. Alas, no more lard for mom and dad. Doctors orders.

The loveliest pie combination: Peach-rhubarb, also from fruit grown right on the property. “Peaches? Rhubarb? How are they ever in season at the same time?,” you ask. They aren’t. But as the peaches come on, along with every other fruit and veg roundabout August, and you’re looking for room to store stuff in the chest freezer, you spot the frozen rhubarb. “Hmmmm … let’s make a pie,” is the natural solution.

Down the block from me is a bakery that is pretty well known – Flour Bakery + Cafe, run by baking’s “It Girl,” Joanne Chang. Awesome place. the line is pretty much always out the door – which is why I don’t really go there too very often. But when I do, it’s oh so good.

Joanne has recently published a cookbook based on recipes she uses at Flour. Bitten with the baking bug, I had to get myself a signed copy, just in time to bake for the holidays. Now, I’m not really a sweets baker – pies are the exception – but the recipes for grown-up oreos and pop-tarts are really spectacular. Every reason to name the book “Flour: Spectacular Recipes from Boston’s Flour Bakery + Cafe.”

Okay, folks – I gotta go get a move-on with that presentation. But, let me leave you with a drool-inducing image of my apple cinnamon pop-tarts baked word for word (almost) from the Flour cookbook. Yum …. 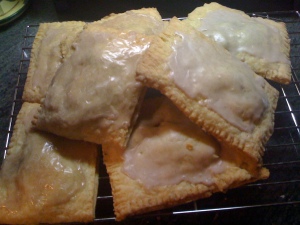 You are currently browsing entries tagged with pie at The Dainty Dot.