That’s Jennifer’s favorite cookie. So when presented with the roughly 18 cookie recipes in Joanne Chang’s Flour cookbook, I made it a priority to bake these. (I did make the oreo recipe first – how could I not attempt oreos??)

About three weeks ago, when I decided to make this recipe, I bought an oatmeal raisin from Flour Bakery in the South End, luckily just a couple blocks away. It was a sturdy cookie, but flexible. Easily chewed – and I chewed quickly. The flavor was unbelievable. The sweetness was exposed with just the right amount of salt. And, most appealing to me – the taste of fresh nutmeg.

I cracked open the cookbook, read over the recipe, and followed the instructions word for word. Three hours with the dough in the fridge to firm (that was a brutal waiting game), 1/4 cup dough scooped onto a baking sheet (or the volume of an ice cream scoop). 19-20 minutes in the oven. A couple of nibbles on the cookie dough assured me I was on the road to cookie oatmeal raisin perfection.

What emerged from the oven was a cookie – yes. But it was a flat cookie. Not the sturdy cookie I had purchased from Flour the day before. They had spread too much and had cooked into each other. I can take blame for that last bit – I may have put my dough scoops too close together. BUT! why had the flattened into oatmeal raisin pancakes? You know exactly what kind of cookie I mean – flat, with remains of sugary bubbles on the surface. They tasted phenomenal, by the way, but come on, I followed the recipe word for word. . What happened?

I did a little Googling, a little tweeting, searching for reasons why my cookies ended up like thin crisps. Baking soda. The problem lay in that little golden orange box. Expiration date: 2006.

It has an expiration date, really? I mean, I knew it had a date on the box. But those dates are just … made up to cover their asses in a lawsuit or something. I don’t know what I thought. Apparently, my baking soda’s effectiveness stopped four years ago. What a knucklehead.

A fresh box later, my second batch of oatmeal raisin cookies turned out to perfection. Really. They were perfect.

Again, I bought a sample from Flour to compare. Okay, so the original was perfectly round. And a tad bit lighter in color than my first half dozen – perhaps a minute less in the oven. But I have to say – comparing taste and consistency, my cookies certainly matched or exceeded Flour’s. Jennifer preferred my version – and she didn’t just say that because she loves me.

Four of these cookies became ice cream sandwiches last night for dessert. I scooped out … yikes, I’m looking through my measuring cups as a volume comparison … I’d say I put close to a 1/2 cup of softened French vanilla (from Whole Foods) between two of these 4-in. cookies and let them set for about hour. Firm cookie with firm, flavorful rich vanilla. I had been searching for cinnamon ice cream, but French vanilla was the perfect blank canvas I guess you could say to that featured the cookies’ profile perfectly.

Most importantly, the point of this whole story isn’t that I made some really amazing cookies. The point for me is I had a success. In something. In a several week period where I’m feeling like an unaccomplished individual I did something right. I made something tasty. And although most of the Super Bowl crowd I hung out with last night didn’t eat my cookies, I felt pretty damn good about them myself. I may be a schlub when it comes to my day job, but I make a pretty fine ice cream sandwich.

On Friday morning I took Baby Dough out of his snuggly home in the microwave. No signs of life. No bubbles. Nothing. So I ditched him. My strategy of reinvigorating Baby with new yeasty grapes just didn’t work.

My main lesson here – just give the starter a bit more time I guess. See it bubbling away – and give it more time to bubble. It’s more of a fine art than I thought.

The other lesson – don’t name your starter. It makes it that much harder when you pour it down the drain.

Friday, 6:02 a.m. Wrapped 12 room temp grapes in a cheesecloth pouch – a few more than the Amy’s Bread recipe calls for. Smushed then a bit to break the skins. Put them in a 1-qt plastic container. Added 113 grams of 75F water and 72 grams all-purpose flour. Mixed it all together. The temp was about 73F. I screwed the top on the container and put it in the microwave with some boiled water. Remember, the heat dissipating from water warms the surrounding air – which, according to Amy, should be about 75F-78F. Like I said before, who’s house is that warm in February?

Friday, 4:58 p.m. Looking good. A thin thin thin layer of liquid is on top. But not bad. And it’s smelling a bit fermenty. Have boiled that cup of water throughout the day to keep the starter warmish.

Saturday, 2:02 p.m. Hmm … bubbles disappeared. I’m thinking the yeast ran out of food to eat. So, I went on to the next step and added 113 grams 80-ish degree water and 72 grams flour. Gave it a stir. Pushed the grapes down in there. Fingers crossed!

Am I obsessing over my sour starter? Yes. I can’t help it – I can’t stand it when I fail. Can’t. Stand. It.

What did I do? Where did I go wrong? Tuesday morning Baby was full of life! Thick and gooey! Bubbly and giggly! Now … now it’s just some mass of water-soaked flour in a 1-quart container.

But, there’s no odor of death in there. It doesn’t smell toxic. Baby didn’t turn bad on me. There might not be a breathing and burping going on, but I don’t think there’s any rank, poisonous build-up taking place either.

So, I’m keeping Baby and attempting to do a Frankenstein-like operation here. I’m adding more grapes. Yeast – Baby has no more yeast (a good thing for a real child, but as a dough baby, it’s the stuff of life). Thinking back to Tuesday, Baby started going downhill once I removed the grapes. So, I’m adding them back in. Fingers crossed.

I saw a good idea from a YouTube video yesterday. Henrietta Homemaker put her grapes in cheesecloth for easy removal of the grapes. Brilliant idea. In those little grapes went, cheesecloth and all. It’s like Baby Dough has a diaper now.

So, Baby Dough is back in the microwave, tucked in there with some warm water. I’ll check on him tonight. Perk up, Baby.

Wednesday 7:37 a.m. Checked on Baby Dough. He’s supposed to be bubbly and active 12-24 hours after the last addition of flour, according to Amy’s Bread recipe. But he’s not so active. In fact, a layer of liquid has formed on top and he’s not gooey anymore. He’s runny. Hmm… Not quite sure what to do. Except put on my boots and shovel.

Wednesday 8:45 a.m. I gave him a good stir with a wooden spoon to see if I could incorporate that liquid. Big bubbles popped up right away then settled down a bit. It smells sourish – I guess that’s a good sign? I put him back in the microwave with some hot water. I’ll check back in around noonish.

Wednesday, 12:32 p.m. Baby Dough began to separate again with a layer of liquid on top. No bubbling means no yeasty activity. Hmmm… so I decided to take a leap of faith here and I went ahead and fed Baby Dough with 113 grams of 80F water and 72 grams of flour. I took Baby Dough’s temp around 11:30 and it was 77F, so that’s good. I don’t think he”s not warm enough. I just think he’s hungry. Or … maybe there’s no yeasty goodness left alive in there? Could that be? Let’s see what happens by evening. 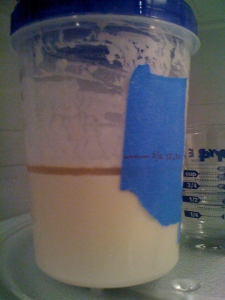 Wednesday, 5:58 p.m. I did a little YouTubing. This liquidy layer is normal. I think. It was on YouTube, so it must be right, right? And Baby Dough is supposed to be a bit runny. I think. My thought is I don’t have a whole heckuva lot of yeasties in there so it’s not bubbling tons. But it is bubbling.

So, reading over the recipe just now, I see I was supposed to have discarded half of Baby Dough and add the 113 grams water and 72 grams flour. Hmmm… I think tomorrow morning I’ll do a do-over on this step and do it right this time.

Gave Baby Dough a good stirring. Tucked him back in the microwave with some nice warm water. Sleep tight, Baby. Bubble away.

After a good stirring, Baby Dough's blowing some tiny bubbles.

My friend Amanda’s comment on my Rye Bread: Day 1 post was this: “Amazing how you make this sound time consuming and gross… yet totally tasty and motivating!”

Little does she know what this mass of flour, water and punctured grapes has turned in to …

Here’s a brief journal of my sourdough starter experience. Consider it a journal of Baby’s First Days. And oh boy, if real babies are as slimy as this, I’m so glad I don’t have one.

(I skipped the first few hours. Perhaps I had a bout of postpartum depression.)

Tuesday, 6:02 a.m. Baby Dough’s big! Must have almost doubled in size overnight. Lots of big bubbles. Hmm… should I move on to the next step?

Baby Dough at about 38 hours. Such a big boy!

Tuesday, 8:27 a.m.: I decided to move on to Step 3 after only 14+ hours. It calls for scooping out the grape remnants and a bit of the starter. It’s snot. It looks like snot. It pulls like snot. It’s baby snot. Of course the grapes all settled on the bottom and I had to scrounge around with an iced tea spoon and pull them up through miles of gooey snot. Good thing was there was a layer of liquid on the bottom through which I could see all the grapes. Finding them all wasn’t so hard through the gooey yeasty snot.

Baby Dough at about 40 hours

Answer me this: Why would anyone EVER think this would be something yummy to add pulverized wheat to and then put in a container to cook over hot coals? That leap of faith from snot to baked goods—if you think about it, that crazy idea created civilization. Goo. Flour. Water. Heat. The wheel. The combustible engine. The Internet.

Added 36 grams flour. Mixed thoroughly. Put back in the microwave. Waiting another 12-24 hours.

Tuesday, 4:24. Baby Dough is 48 hours old – yay! Threw a little party, invite other doughs from the neighborhood. They are so adorable at that age …

Baby Dough’s looking a tad under the weather, a little runny. I snuggled him in the microwave with another cup of boiling water and will check back in later. For now, I’ll let him rest. Perhaps the party was too much.

You are currently viewing the archives for February, 2011 at The Dainty Dot.