That’s Jennifer’s favorite cookie. So when presented with the roughly 18 cookie recipes in Joanne Chang’s Flour cookbook, I made it a priority to bake these. (I did make the oreo recipe first – how could I not attempt oreos??)

About three weeks ago, when I decided to make this recipe, I bought an oatmeal raisin from Flour Bakery in the South End, luckily just a couple blocks away. It was a sturdy cookie, but flexible. Easily chewed – and I chewed quickly. The flavor was unbelievable. The sweetness was exposed with just the right amount of salt. And, most appealing to me – the taste of fresh nutmeg.

I cracked open the cookbook, read over the recipe, and followed the instructions word for word. Three hours with the dough in the fridge to firm (that was a brutal waiting game), 1/4 cup dough scooped onto a baking sheet (or the volume of an ice cream scoop). 19-20 minutes in the oven. A couple of nibbles on the cookie dough assured me I was on the road to cookie oatmeal raisin perfection.

What emerged from the oven was a cookie – yes. But it was a flat cookie. Not the sturdy cookie I had purchased from Flour the day before. They had spread too much and had cooked into each other. I can take blame for that last bit – I may have put my dough scoops too close together. BUT! why had the flattened into oatmeal raisin pancakes? You know exactly what kind of cookie I mean – flat, with remains of sugary bubbles on the surface. They tasted phenomenal, by the way, but come on, I followed the recipe word for word. . What happened? 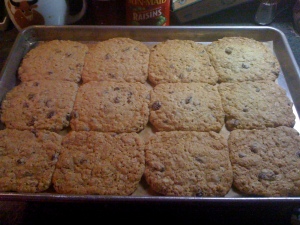 I did a little Googling, a little tweeting, searching for reasons why my cookies ended up like thin crisps. Baking soda. The problem lay in that little golden orange box. Expiration date: 2006.

It has an expiration date, really? I mean, I knew it had a date on the box. But those dates are just … made up to cover their asses in a lawsuit or something. I don’t know what I thought. Apparently, my baking soda’s effectiveness stopped four years ago. What a knucklehead.

A fresh box later, my second batch of oatmeal raisin cookies turned out to perfection. Really. They were perfect. 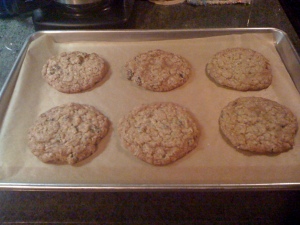 Again, I bought a sample from Flour to compare. Okay, so the original was perfectly round. And a tad bit lighter in color than my first half dozen – perhaps a minute less in the oven. But I have to say – comparing taste and consistency, my cookies certainly matched or exceeded Flour’s. Jennifer preferred my version – and she didn’t just say that because she loves me.

Four of these cookies became ice cream sandwiches last night for dessert. I scooped out … yikes, I’m looking through my measuring cups as a volume comparison … I’d say I put close to a 1/2 cup of softened French vanilla (from Whole Foods) between two of these 4-in. cookies and let them set for about hour. Firm cookie with firm, flavorful rich vanilla. I had been searching for cinnamon ice cream, but French vanilla was the perfect blank canvas I guess you could say to that featured the cookies’ profile perfectly.

Most importantly, the point of this whole story isn’t that I made some really amazing cookies. The point for me is I had a success. In something. In a several week period where I’m feeling like an unaccomplished individual I did something right. I made something tasty. And although most of the Super Bowl crowd I hung out with last night didn’t eat my cookies, I felt pretty damn good about them myself. I may be a schlub when it comes to my day job, but I make a pretty fine ice cream sandwich.

You are currently reading Oatmeal Raisin Cookies at The Dainty Dot.