That was the subject line of the email we received from our friend Karen. For $15, she picked up a shellfish license that allows her to walk around in the low-tide sands of Provincetown, clawing for clams and such. She picked up two licenses, actually, so she could share the experience with folks like us. My partner, Jennifer, and I were going to be in Provincetown for New Year’s weekend, and she knew we’d be up for a hunting-gathering experience.

Armed with an official clam rake, purchased new for our first clamming experience, we joined Karen and Robin at low tide on New Year’s Eve afternoon. We picked a spot east of town. For about 30 minutes we raked around the wet sand of the flats. Nothing. Okay, I lied. We found two clams – one of which was less than 1 in. thick and we had to dig back into its home.

Apparently conditions hadn’t been ideal for clams in that spot this summer. Karen knew of another spot about 2 miles further west and we sped off to hopefully richer clamming fields.

The first sign we reached fertile ground was the mass of rake-armed people out on the flats. Second sign: full clam baskets dangling from arms of weary food gatherers. After trudging through a bit of shallow water (note to self: purchase galoshes) we spent all of a minute raking before we hit the jackpot. Robin hit the clam jackpot first, actually. Then Karen. You don’t have to dig deep to find these critters. They’re just below the surface. I’d hit a few miscues – some empty scallop shells, a hunk of asphalt – but when you hit a clam with a tine, you know from the sound and from the bulk you’ve found your treasure. 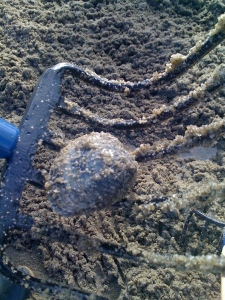 When I found my first clam – a quahog – I was rewarded with more than one actually. They tend to hang out in batches. My batches tended to have three. Robin found up to six in several spots. All told, the four of us walked off the flats with about 50-60 clams.

Speaking of walking off the flats, we ran into the local shellfish commissioner while calling it a day. An affable guy, he explained the quahogs we found pretty much stay near the surface. The softshell steamers are a bit further down. The longer-tined rakes, like the one we bought, are ideal for harvesting those. Rather than just randomly digging 6-in. holes hoping to hit payload, the commissioner  said to look for tear-shaped hole in the sand. Spot those, and you’ll likely find your steamers.

Don’t like clams because of the sand? Karen says there’s a trick to getting the clams to give it up. Throw them into a bucket, fill with water, add a bunch of baking soda and let them sit overnight. Not sure exactly how that works, but if she says it works, that’s enough proof for me.

I’ll let you know if it works. Meanwhile, I’m looking for my best linguine and clam sauce recipe. Harvesting and cooking – it’s so primeval.

You are currently reading Clamming? at The Dainty Dot.