Will spring ever get here? Until it does, one of the ways to deal with cold and damp weather is with hot soup. Hot, hearty soup. This is one of our favorites in the hot and hearty category. It’s “double” mushroom because it uses both fresh and dried mushrooms. Adding the dried gives the soup its earthy heartiness.

This is another recipe Jennifer acquired from a soup class several years ago. Note on the bottom says it’s from the Great Vegetarian Cooking Under Pressure book. Ah, yes, “under pressure.” This is made in a pressure cooker! Have no fear, people—pressure cookers won’t explode on your stove top. And if you don’t have a pressure cooker, just cover and simmer for … well, I’m not sure. Just keep checking to see if the barley is toothy.

As before, the recipe below is with our adjustments 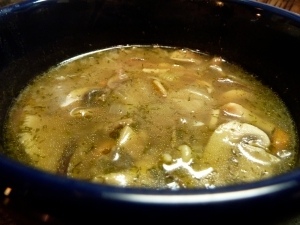 -Now, for the “6 cups boiling stock” – set a pot of about 4 cups stock (veggie is good, chicken is okay if you don’t have veggie) to boil. You’re going to add the mushroom liquid to it when those are done steeping.

-While the mushrooms are steeping is a good time chop your veg.

-When mushrooms have steeped, drain the liquid into a measuring cup. You should have a bit less than 2 cups. Just add water to fill up to 2 cups. Add to the pot of stock. Reserve mushrooms.

-Heat oil in the bottom of the pressure cooker (or soup pot if not using a pressure cooker) to medium-high. Add garlic and onions. Cook for 1 minute, stirring so they don’t stick. Add the stock and then invite everyone else into the pool!

-Lock the top onto the pressure cooker. Bring it up to high pressure, then lower heat to maintain that pressure. Let it cook away for 18 minutes. Then, remove pressure cooker from the heat and place it under cool running water to bring the pressure down quickly. Remove the lid, being sure to face it away from you. You don’t wanna get hit with a cloud of steam!

-IF you’re not using a pressure cooker, bring the soup to boil, cover the pot but leave a little crack, and then turn it down a bit to simmer. Let it bubble along for … let’s say 35 minutes and then check every 5 minutes or so until you feel the barley is cooked.

-Discard the bay leaves. Add a bit more salt and pepper. In my opinion it needs more salt than you’d think.

-With barley in there, it’s going to thicken up, especially after being in the fridge for a day or two. Just be aware. If you want, add some stock or water to thin it out a bit. I kinda like the soups that turn into stews the next days.

It’s one of those soups that is dinner-worthy if you pair it with a salad or suitable for lunch with some toast. In fact, it’ll be my vegan lunch in about 3 hours.

You are currently reading Double Mushroom Barley Soup at The Dainty Dot.