Jennifer and I moved into a newly constructed building last September. To be more accurate, it was still under construction when we moved in, with fine work still being done inside. At the time, the outside perimeter – the barely 3-ft. wide space between the sidewalk and the building – was still a rubble pile. Talk about unsightly. And being a gardener, I was itching to get at designing and installing a landscape that would match the mod look of this unique house.

The contractors eventually added some soil to that space. Correct that—it was fill and not anything near good garden soil. They also added in a strip of black steel landscape edging between the sidewalk and the soil. Thing is, though, the edging was flush with the sidewalk. Any sort of mulch that I would add to the garden space would wash onto the sidewalk. And with the $15 per bag mulch that I prefer, I didn’t want any of that washing away.

After the soil was added and a few plants were just hanging out.

Since the building is based on German Passivhaus technology, I wanted the landscaping to reflect some German landscape aesthetic. In other words, ornamental perennial grasses (the Germans love ornamental grasses). Ornamental grasses are awesome because they are low water use plants, add visually to a landscape even in the winter with their stiff (i.e. dead) stalks, look kinda cool as their feathery flowers blow in the wind, grow into nice-sized clumps, and come in a range of colors, textures and heights to choose from.The plantings around the new Shapiro Building at Boston Medical Center served as my inspiration.

Landscaping around the Shapiro Building at Boston Medical Center served as inspiration.

The grasses would act as the foundation of the landscape and I would add some color with bulbs, annuals or perhaps choose some smaller perennials later on. So, last fall I planted a dozen or so Pennisetum ‘Karly Rose’ grasses (those will become about 3 ft. high), added in several ‘Blue Pacific’ creeping junipers, and dug in 100 ‘Daydream’ tulips. And then we suffered through a very long and snowy winter.

In late March I trimmed back the dried stems of the grasses and eagerly awaited the tulips. And I admit, it was very, very exciting when they finally popped.

‘Daydream’ tulips in the new landscape.

Something was missing—other than the grasses, which I knew would emerge slowly over the course of April and May. What was missing was my favorite mulch—buckwheat hull mulch. Its dark color would really make those tulips so stunning.  But in order to lay down the mulch, I needed something to hold the mulch inside the garden area without it washing away when it rained. After a little research, I decided on simple aluminum edging. I dug a shallow trench just behind the existing steel edging, inserted the aluminum edging about 1.5 inches down into the soil, secured it with some stakes every few feet, and backfilled with soil. 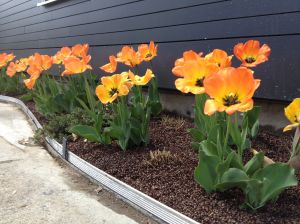 Landscape after the mulch and edging have been added.

Makes quite a difference, huh? Turns out the aluminum accents portions of the building’s edges, so that’s a bonus. And the edging and mulch will go well with the grasses once they emerge (you can just barely see one right there square in the front).

The best thing, though, is what the addition of the edging, the mulch, the plants—of the entire garden  we are installing—is communicating to the neighbors. It says “We care about where we live and we really like it here.” In other words, curb your dog, put that wrapper in a trash can, throw that cigarette butt elsewhere, and it’ll continue to look nice for the whole neighborhood. While working on this over the course of several days many neighbors came up to me to comment on how nice it looks. “This was an overgrown trashy lot two years ago,” one young guy said to me. For a young man to even notice it enough to come up to a stranger and comment—well, I take it he was impressed with how that once empty lot has changed.

Because this garden space is so public, it’s not just for Jennifer and I to enjoy. It’s something the whole neighborhood can share in. That’s really what gardens are for. I’ll post more photos as the grasses grow and after I plant some annuals. Meanwhile I have a balcony herb garden in the works.

§ One Response to Adding Landscape Edging

You are currently reading Adding Landscape Edging at The Dainty Dot.