We’re nearing the end of Hearty Soup season. And I feel like it got short-shrifted this year. Bone-warming broths, stews and soups weren’t really needed so very much this winter. And it’s too bad—hearty soups are my favorite to make.

We were able to squeeze in a batch of Potato & Kale Soup earlier this week. Thank goodness, because a winter soup season shouldn’t go by without this cooking on the stovetop at least once.

Jennifer and I tag-teamed this recipe. I chopped and prepped late in the afternoon, then she came home and cooked, giving it her special touch while I lunged and downward-dogged and shavasana’d. The potatoes and kale really satisfied a hungry yogini.

Full disclosure here: Full credit goes to Jennifer, who got this recipe from a soups class she took back in the late ’90s. We’ve adjusted a bit here and there. But not spectacularly so. 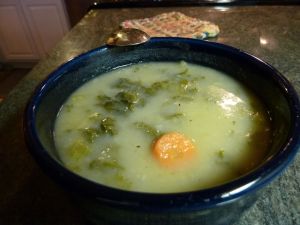 Potato-Kale Soup with a drop of sherry vinegar

-Heat oil in large Dutch oven over medium heat. Add onions (and leeks if you have them) and sautee until soft and translucent.

-Add potatoes, parsley, whole carrots, whole celery, bay leaves and 6 cups water or broth, and season with salt and pepper (several good pinches of salt/twists of the pepper grinder). Cover. Simmer on low to medium low for about 45 minutes.

-While the soup is simmering, wash the kale and remove the thick ribs. Tear the kale into a size that won’t annoy you – i.e. not too big. You’re going to steam/cook the kale in about a cup or two of water/broth in a high-sided skillet with a lid. Boil that water, add the kale, cover, and let it cook for not that long – 4-5 minutes. You want it tender but not melty-mushy. Drain out the water and set the kale aside.

-When the soup base has simmered 45 minutes, remove and RESERVE the carrots. And remove and DISCARD the celery. Puree by using a light touch with an immersion blender—you want part of it pureed but you still want some chunks of potato in there. OR, just puree half of the soup in a food processor and return it to the soup pot.

-Stir in kale. Chop the reserved carrots, add them back in there, too. Heat until nice and hot. Give it a taste – add salt and pepper as necessary.

-Here’s the last bit that is Jennifer’s touch and it’s completely optional: Add a tad – let’s say a 1 tbs – of sherry vinegar. Not so optional, uh? That’s good stuff, that soup is.

A nice “creamy” soup—and absolutely no cream! And now that I think about it, it’s vegan. Bonus.

What’s your favorite hearty soup recipe? Drop in a comment and let us know.

You are currently reading Hearty Soup: Potato & Kale at The Dainty Dot.