Bread Cracking in the Oven—Solved!

Last summer I discovered the joys of bread baking. I guess you’d call it my hobby now. And I say hobby because … well, unlike putting a Pop Tart in the toaster and waiting for the ding, there are levels of complexity at every step. There’s practice and skill and problem-solving and continual learning from mistakes. Described that way, it seems more like a sport. And, considering  I currently have three different sourdough ferments tucked snuggly in the warm and draft-free microwave, perhaps I’m also a collector.

Yesterday, I had one of those “Aha!” learning experiences. I made a batch of Country Sourdough from the Amy’s Bread cookbook. It was my first time making this recipe and considering my firm levain wasn’t so firm and I substituted in my sourdough starter, I wasn’t so sure the recipe would work properly.

I made the dough, let it autolyze, formed it into a ball, let it rise, punched it down, let it rise again, separated into two doughs, formed boules and let them rise again – seam side down – in floured baskets. The dough looked and felt great. So far, so good.

Now, in Amy’s instructions, typically once you get to this point in the recipe it’s almost as if they copied and pasted the remainder of the instructions for each and every recipe. At least for the handful of recipes I’ve tackled so far. BUT, this time she had a slightly different twist in the instructions. She said to tip the boule out of the basket onto the prepared parchment paper so the seam was now on top. Hmmm … I had not encountered that in previous recipes. All others were seam side down. Why would you put the seam up?

I had two boules – I thought, “Let’s try one seam side up, one seam side down, and see what happens. I scored both loaves on top, put them in the oven, and let them go.

Here’s what came out of the oven. Can you guess which one was which? 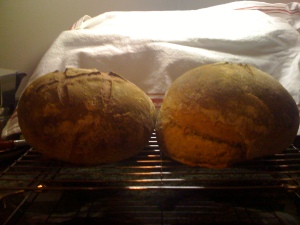 Seam side up on the left, seam side down on the right.

The one on the right was the seam-side down. Even though I scored the top, the steam escaping the loaf escaped through the seam on the bottom, causing it to tear.

For the boule on the left, the scores through the seam on top let the steam escape. Not having a weak spot—a seam on the bottom—prevented the bottom from bursting.

I tried to seal that seam as tightly as possible, but apparently not enough. This doesn’t happen with all of the breads I’ve made, but I have had this happen before. And now I know why. Problem solved.

You are currently reading Bread Cracking in the Oven—Solved! at The Dainty Dot.